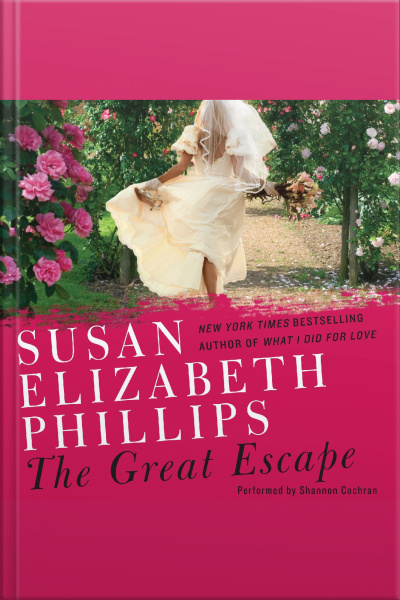 “Next to Tracy and Hepburn, nobody does romantic comedy better than Susan Elizabeth Phillips.”
—Minneapolis Star Tribune

Perennial New York Times bestseller Susan Elizabeth Phillips now provides her fans with The Great Escape from ordinary women’s romantic fiction. One of today’s most beloved writers, the incomparable Phillips follows up her utterly beguiling hit, Call Me Irresistible (“Phillips at her very best. Romantic, funny, sexy, and poignant” —Kristin Hannah) with a sequel that’s equally impossible to resist. Returning in The Great Escape are some of Phillips’s most adored characters, including headstrong, impetuous ex-president’s daughter, Lucy Jorik, who’s just abandoned her fiancé, Ted “Mr. Irresistible” Beaudine, at the altar. Now she’s looking for adventure—and perhaps a little romance—embarking on a wild and hilariously unpredictable road trip that begins on the back of a rather menacing-looking stranger’s motorcycle. The winner of more Favorite Book of the Year Awards than any other romance author, including Nora Roberts, Susan Elizabeth Phillips offers her fans an Escape to remember, and they’ll certainly want to come back for more!